Australia is currently having a conversation about what it means to enjoy religious freedom and what protections are necessary to ensure all Australians are free from religious discrimination.

The Uniting Church has played an active part in this conversation and participated in ongoing consultations with the Federal Government as it considers new Religious Discrimination laws.

The Uniting Church in Australia (UCA) believes the right to religious freedom is an important element in the protection of all human rights by law nationally. The UCA has a long history of support and engagement in human rights, because we believe that all people are created in the image of God and are loved and valued by God.

As a result, the consistent position of the Uniting Church has been, and continues to be, that legislative provisions for religious freedom would best be made through the mechanism of a comprehensive Human Rights Act, within which the competing claims and values inherent in this discussion may be grounded in a holistic approach to human rights.

However, in seeking to achieve this, we believe the redrafted Religious Freedom Bills do not adequately balance the human rights of all Australians.

“People should be able to enjoy their right to freedom of thought, conscience, religion and belief – however, the manifestation or expression of their religion and beliefs should not harm or demean others, nor should it automatically be privileged over other rights,” the submission reads.

The UCA submission also raised concerns about the implications of the legislation for the Church’s large network of schools and community service agencies.

“As a provider of education and community services across Australia, including hospitals and aged care services, we are concerned certain provisions within these Bills undermine our ability to ensure safe and inclusive workplaces and may act as a barrier to vulnerable people accessing essential services or seeking employment.”

Public submissions on the Second Exposure Drafts closed on 31 January 2020. 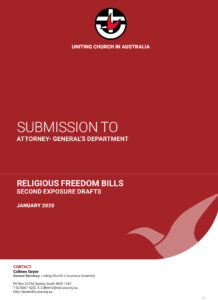 Speaking at a public forum on the Bills in Sydney on 24 January 2020, President Dr Deidre Palmer said, “it is important that people are able to freely practice religion without fear.”

“Christians of all persuasions enjoy and exercise a robust freedom of speech in Australia. But privileging statements of religious belief at the expense of other people’s dignity and wellbeing is not something we support.”

“Christians in Australia are not persecuted. In Australia, churches aren’t victims. To cultivate some kind of victim status is disingenuous.”

“We are significant, influential organisations, actively contributing in positive ways to the Australian community.

“My understanding of Christian faith and the way of Jesus is that it is about liberation, love and justice for all people.

“These are the positive values I’d like to see reflected when Christians speak about human rights.”

“Whatever the outcome of this legislation, I would hope that both within Australian faith communities and in our wider Australian society, that we would promote respectful conversation among people who have different viewpoints, for the common good of all.”