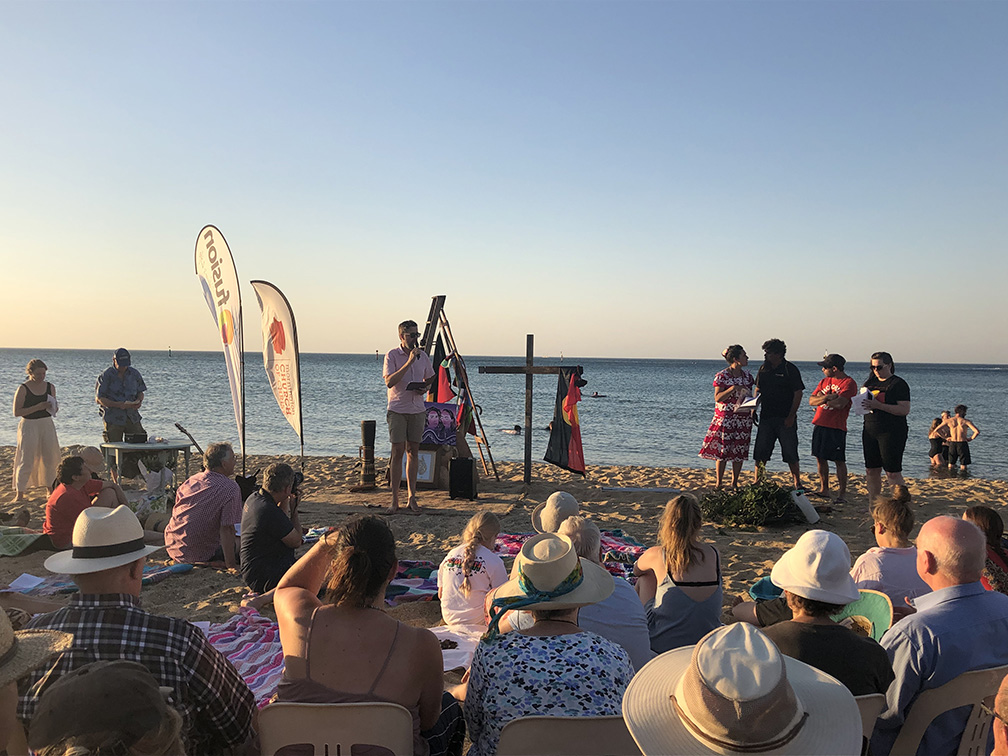 This year, Uniting Church members were encouraged to hold a Day of Mourning on 20 January to reflect on the impact of invasion on First Peoples.

Here are two stories of how people participated in this event.

Tewantin Uniting Church in Queensland took a great deal of time in getting to know the stories of the First Peoples in their local area, in particular the Murdering Creek Massacre in 1869. A painting depicting the massacre was borrowed from the local community as a focal point in the service.

Rev Jennie Gordon joined with others at the Fisherman’s Beach in Mornington where they were invited into a time of remembering and honouring of stories.

We would love to hear from more people about how they marked the Day of Mourning and what came from this experience. This will help further resource the event next year. Post to Facebook, or email circles@nat.uca.org.au

A STORY NEEDING TO BE TOLD

By Revs Jenny and Neil Sims

Artist Sammy Ray Jones tells the story of the Murdering Creek massacre on the edge of Lake Weyba in 1869 in his large painting (above). This year is the 150th anniversary of that massacre.

This local story was the central story of the Day of Mourning at Tewantin Uniting Church on 20 January this year.  We were confronted with the need to mourn the suffering of the First Peoples of this nation.

Thanks to those who told us that the first Day of Mourning of Aboriginal people in Australia was in Sydney in 1938.  About 100 people gathered in Australia Hall and passed the following resolution:

WE, representing THE ABORIGINES OF AUSTRALIA, assembled in conference at the Australian Hall, Sydney, on the 26th day of January, 1938, this being the 150th Anniversary of the Whiteman’s seizure of our country, HEREBY MAKE PROTEST against the callous treatment of our people by the whitemen during the past 150 years, AND WE APPEAL to the Australian nation of today to make new laws for the education and care of Aborigines, we ask for a new policy which will raise our people TO FULL CITIZEN STATUS.

After this, from about 1940 to 1955, a number of churches observed an annual Day of Mourning for the indigenous people of Australia.

At our service at Tewantin Uniting this year, we used the liturgy provided and the preacher focused particularly on Micah 6: 8,

What does the Lord ask of you but to do justice, to love kindness and to walk humbly with your God?

Responses after the service included:

It is surprising, there were no strong negative reactions to the service.

Below is a photo of Lake Weyba, set in Noosa National Park.  Murdering Creek enters the lake on the south-east shore.

The Murdering Creek painting is the property of Beulah Community, Buderim, and was loaned to us by Heather Johnston and delivered to the service by Sue Pitt.

Further information on the Murdering Creek Massacre and the 1938 Day of Mourning was provided to us by Meredith Walker AM, historian.

LISTENING TO THE TRUTH OF OUR HISTORY

It’s hard to know how to respond to January 26th. The annual Day of Mourning declared by the Assembly and held for the first time this year offered us a collective moment to pause and acknowledge the pain of the past, to lament our part in the invasion of this land and to participate in healing for us all, First and Second Peoples together.

I attended the Common Grace Prayer Service on Fisherman’s Beach in Mornington. We were led by Indigenous artist Safina Stewart and welcomed by elders of the Bunurong Land Council.  Rev Cameron McAdam from The Village Church in Mt Eliza invited us into a time of remembering and honouring names and stories as he read a difficult and confronting message titled ‘Stolen Lives in 2019 and Aboriginal Deaths in Custody’. We prayed, sang and were blessed on the beach.

It’s hard to know how to respond. If we want to change the heart of this nation, we can commit to learning more of the truth of our history, being present to the pain and living alongside our Indigenous brothers and sisters in the company of Jesus.