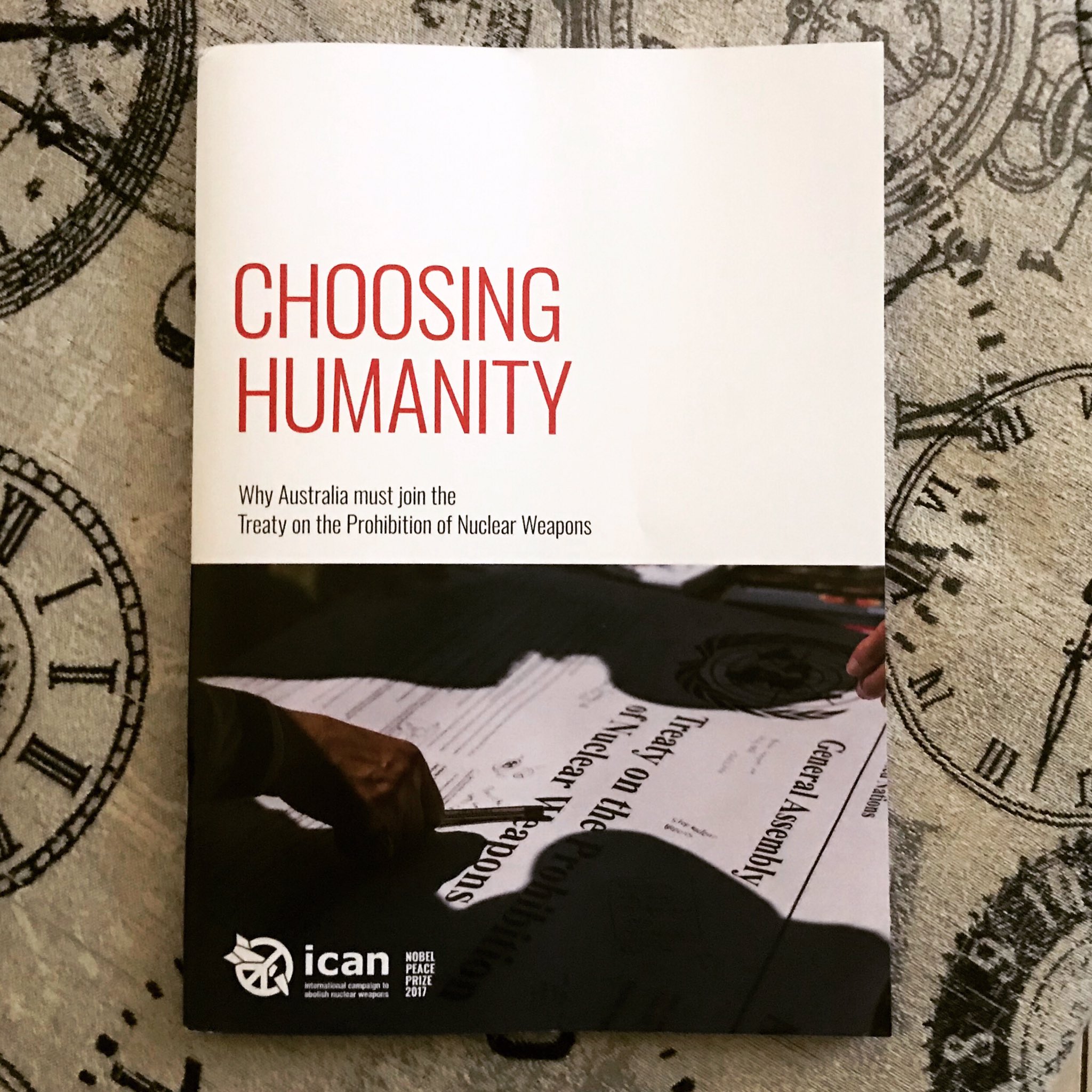 “Australia has long been an advocate of nuclear disarmament and has been an active party to the nuclear Non-Proliferation Treaty. But, unlike New Zealand, it has not signed on to the Treaty on the Prohibition of Nuclear Weapons. In fact, its attitude has been very negative so far. If we believe it is possible to restore the world to a nuclear-weapon-free state, and that we must work towards this for the sake of generations to come, we must encourage the Australian government to sign on to this treaty and encourage like-minded governments to do the same, and to work together to persuade states with nuclear weapons to join together in renouncing them.”

Elizabeth A Evatt AC  Lawyer and jurist: First Chief Justice of the Family Court of Australia

The Australian Government is currently being urged to become a member of the nuclear-armed nations. Professor Hugh White is promoting a debate on Australia acquiring its own nuclear arsenal, despite our 45-year commitment to nuclear disarmament under the Nuclear Non-Proliferation Treaty and the South Pacific Nuclear Free Zone.

White proposed that Australian nuclear weapons “would be aimed at cities, they would be aimed to impose massive damage on an adversary to deter them from using nuclear weapons against us.”  In response, human rights lawyer Diana Sayed drew attention to the devastating humanitarian impacts of nuclear weapons, noting that such a course of action “would trigger a nuclear arms race in our region… The fact that Australia would be entertaining this thought is unfathomable and unconscionable to me and it goes against everything in international law”.

This debate is a dangerous distraction from the difficult yet crucial task of eliminating nuclear weapons. The next step Australia must take is to reject the flawed notion of nuclear deterrence and join the UN Treaty on the Prohibition of Nuclear Weapons. Nuclear weapons are never a legitimate means of defence.

During August, the International Campaign to Abolish Nuclear Weapons (ICAN) in Australian launched a new report on why Australia must join the nuclear ban treaty.

In Newcastle the report was introduced on Sunday 4th August following the annual  Hiroshima Service of Commemoration, organised by Christians for Peace. Local churches are giving strong support to signing the Treaty.

In the Foreword to the ICAN Report, Ms GillianTriggs, the former President of the Australian Human Rights Commission writes:

“The danger of nuclear war is growing. The more we learn about the catastrophic consequences of any use of nuclear weapons, the worse it looks. Nine nations possess some fourteen thousand nuclear weapons.1 Eighteen hundred of them stand poised and ready to launch within minutes. As long as they exist, nuclear weapons pose the most acute existential threat that human beings have created for ourselves and for all species with whom we share planet Earth.

Humanity has made substantial progress towards eliminating other indiscriminate and inhumane weapons – chemical and biological weapons, landmines and cluster munitions. Evidence of the indiscriminate and unacceptable consequences of these weapons provided the necessary motivation to outlaw them.”

In a statement entitled, Seeking a Just and Peaceful World, which is contained in the Report, Rob Floyd, Associate General Secretary of the Uniting Church in Australia, writes:

“The Uniting Church in Australia (UCA) has a long commitment to working for a world free from nuclear weapons.  As a proud member of ICAN, we have continued to call upon our political leaders to work towards a ban on nuclear weapons.

The UCA believes that God in Jesus came to make peace. As Christians, we are called by God to love our neighbours and to work for an end to violence and fear in our world.

The destructive power of nuclear weapons threatens all life on this planet. We believe that reliance upon nuclear weapons to attain peace and security is entirely contrary to God’s creative will for the world.

In our recent 2019 statement, Our Vision for a Just Australia, we called on the Australian Government to sign the Prohibition of Nuclear Weapons Treaty as part of Australia’s contribution to a just and peaceful world.

It is the first Treaty to comprehensively outlaw nuclear weapons and sets out a pathway for their total elimination.  We maintain that reliance on weapons for peace and security can never achieve a just and lasting peace. Rather, we seek to build a world transformed by hope, peace and justice where the sacredness of all life is protected.

He concludes: “We continue to pray that those who seek security in nuclear weapons may discover that genuine security can only be achieved through non-violent means.”

ICAN, founded in Melbourne in 2007, and now an international movement, was awarded the Nobel Peace Prize in 2017 for its work in developing the UN Treaty on the Prohibition of Nuclear Weapons.

The new report  urges the Australian Government to continue the established tradition of our country’s support for similar UN Treaties.

It is time to join over 130 nations which have already given their support to the prohibition of nuclear weapons.

READ EXTRACTS FROM THE CHOOSING HUMANITY REPORT – A helpful introduction to the report, compiled by Doug Hewitt.

WHAT CAN YOU DO?