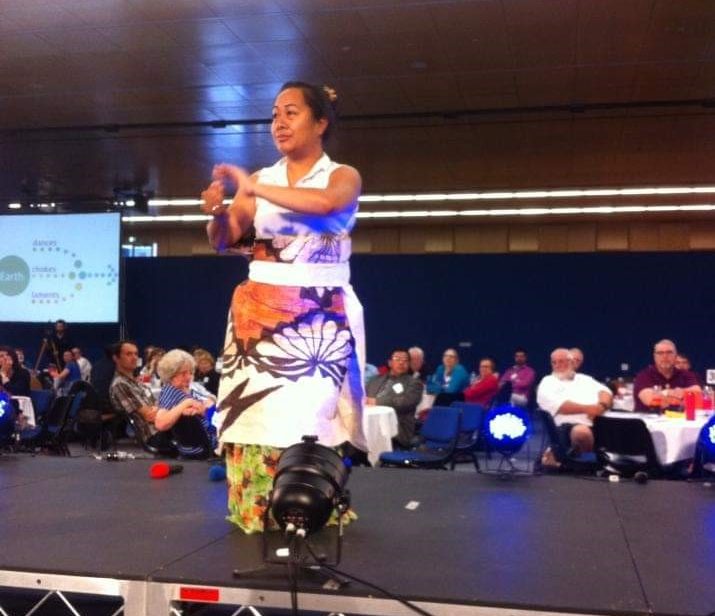 Lofa Anga'aelangi at the NSW/ACT Synod meeting in 2014 as part of the Uncommon Token group which led bible studies.

Tau’alofa Anga’aelangi, or Lofa, is a Panel Member for the Growing in Faith Circle. She shares some of her story.

Growing up in the Methodist church in Tonga has shaped my family, identity as a young woman and my interpretations of the bible.

May is a season in the Methodist church calendar where the Sunday school would lead worship and act out a certain story in the bible. At the age of four to five, we were already memorising hymns and bible verses for this special Sunday, also known as white Sunday or Faka-Me.

The scripts for most of the dramas were written by a lay or ordained person. The writings came from the interpretation of the writers and were memorised by the small children. Those interpretations strongly influenced our understanding of biblical stories. Therefore, they became the only way of remembering and understanding the stories from scripture.

As we grew older and having heard different interpretations of those stories, it became a matter of challenging the memories and traditions from our own childhood upbringing.

When the story of Jezebel became one of the class dramas, none of the young girls wanted to play her role because she was statically portrayed as evil, promiscuous and unfaithful. In comparison, Esther, Ruth and Naomi were popular characters. We would fight over who would play the role of these great women.

My interest is in biblical hermeneutics. What do we mean when we ask the church to revisit difficult passages and characters such as Jezebel?

My feeling, on returning to scripture, it is also about the reader being liberated and having the permission to take a different lens.

Nevertheless, the role of scripture in our worship and daily use is not about always about coming up with new meanings. Rather, it is about us being part of God’s story. We are liberated and have permission to see ourselves in God’s narrative.

Our talanoa in Pasifika flows from the same nuances. I am reminded of the wise words of Rev. Dr Havea:

“For events in island-story telling to happen, I ask you, our readers two things: reread the passages until you have an intuitive awareness of the stories, and be free to redirect the stories where and when you can. Our purpose is not to recover these stories but to let them loose, by leisurely telling them in conversations.”

This is where my passion for scripture is grounded. We read and tell scripture as part of our everyday life because we are part of God’s story. It is also my hope that we revisit characters such as Jezebel and see her from different perspectives rather than those of our Sunday school days.

I am excited to be part of the Growing in Faith Panel. I feel this is a great platform to ask the church about revisiting. Who gives permission to the shifting of our lenses.