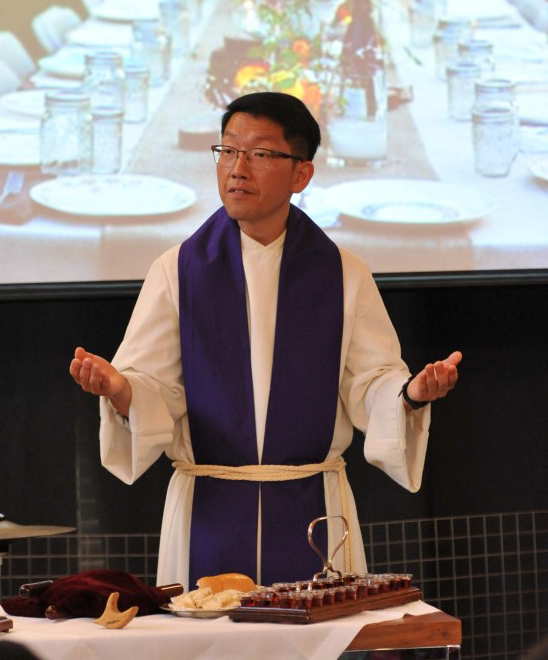 Rev. Seung Jae Yeo is a Panel Member for Walking Together as First and Second Peoples. We asked Seung Jae to share some of his story.

My name is Rev. Seung Jae Yeon, my Korean name is 연 승재 and in Chinese characters is 延 承宰.  Gok-San is like my tribe and it is the place of the Yeon family’s origin in the Korean Peninsula. The First Ancestor (or their group) immigrated from Henan, China and then settled in that region. My dad’s side is from Freshwater people.

I am currently in placement at Boronia Park Uniting Church (NSW-ACT Synod) where I began ministry in 2014. In 2001 I married Grace Song (her tribe is called Yeo-San and from Saltwater people). We have raised three children, Joshua Yeon, 15, Daniel Yeon, 13, and Heather Yeon, 9.

I’m KOREAN. I believe that I’m the first Korean minister in Uniting Church who was blessed by UAICC members in 2014 as part of my ordination.

It all began with my first encounter with the First Peoples in Nanima, Wellington in 1999. Since then, I believe that the Holy Spirit, who has been with the First Peoples from the Dreamtime, has led me so far. Sometimes I forget about the sense of call, but the Spirit has never forgotten about my presence in the Land and the right path that I need to walk.

My hope for the Circle is to lay another stepping stone that can lead both the First Peoples and the Second Peoples toward the Kingdom of God every day.

An Australian Indigenous person who inspires me is Paul Coe, a Wiradjuri man, an Australian Aboriginal activist and my teacher at Eora College, Redfern. He taught me how to see the world and its history with the view of nonlinear time/circular time and how we need to sit in circles as we gather in the Land of the First Peoples. He inspired me to resist the westernisation of traditional cultures by teaching the lessons of Aboriginal warriors such as Pemulwuy, Windradyne and Walyer.